"I listened, just now, to all 3 of the CD's you sent and was quickly toe tapping. I'm a rock and roller and can say it made me want to dance. My 40 years in medicine has shown that there are those who respond to chronic illness as if it's a boulder that drops on them and those for whom the illness is more mosquito than boulder. It is a grand use of the blues that uplift. I don't hear you celebrate your illness, rather celebrate life to its fullest. I think my whole professional life I've heard so many take the boulder. I'm forever looking for experts in transcendence of profound illness-to show its possibility. I will use the tapes for this. Bless the powers of the arts"

My songs are fueled by my passion to never give up, but they also tell my story from the beginning, as a young girl in love, out of love, in love, then once again heartbroken and struggling with a disability.

I believe many will be able to relate to my songs and I hope to give a voice to the millions of disabled people around the world.

Don't Let It Stop You 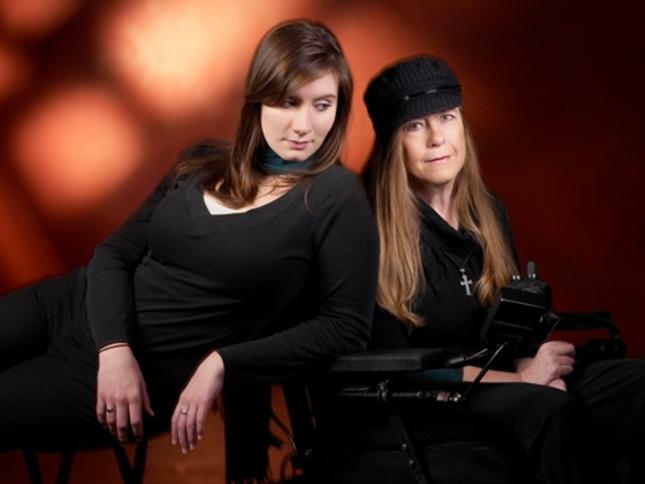 Please enjoy our new music video, "Pray for the People of All Nations".

I am a singer-songwriter that has been in the business since I was 15. My style is primarily blues rock, but also influenced by other genres including folk and a bit of country.

Traveling throughout the United States I have led several bands while playing bass guitar and acoustic guitar. Less than half way through my career, I was diagnosed with MS, Multiple Sclerosis, which has put me in a wheelchair and taken my ability to play instruments. Maybe a bit crazy but, that is not stopping me!  I continue to write, sing and perform in the United States and Europe with world-class musicians, which has included, lead guitarist Jock Bartley from the band Firefall, saxophonist Philip McClard (who was formerly with Chris Daniel & the Kings), Dutch violinist, Siard de Jong, from Amsterdam and Dublin born whistle, wind modulator & clarinet player, Mark Gilligan. My daughter Jessica joins me on guitar and vocals.

We have received attention from The National and International MS Societies and organizations. We performed in Chicago for the National MS Society's Annual Conference, and the DNC (Democratic National Convention) in 2008 in Denver. 2009 we traveled to Amsterdam where we performed at the famous Paradiso and two other cities in Holland. In 2010 we were asked to perform for the 20th anniversary of the ADA (Americans Disability Act) at the Denver Botanical Garden's.